Acupuncture doesn't work -- for anything

"After decades of research and more than 3000 trials, acupuncture researchers have failed to reject the null hypothesis, and any remaining possible specific effect from acupuncture is so tiny as to be clinically insignificant.

This has profound clinical, ethical, scientific, and practical implications. Humanity should not waste another penny, another moment, another patient – any further resources on this dead end. We should consider this a lesson learned, cut our losses, and move on."

That’s interesting because the NHS here in the UK fund acupuncture for patients. I only had one session as it made me faint due to my aversion to needles so I can’t say if it would have done anything for me. Based on this research probably not although I have heard quite a few people who swear by it.

Basically just a “theatrical placebo”. I think the NHS was funding homeopathy as well! Even worse. In the article they say the following:

“And when no effective treatment exists for a medical problem, it leads to a tendency to clutch at straws. Research has shown that acupuncture is little more than such a straw.”

While there are effective treatments for migraine, it can be a b*tch to get under control for many and there is that tendency to clutch. Totally understandable.

This may be the worst thing to happen to Chinese foreign relations since Tiananmen Square! :lol:

Basically just a “theatrical placebo”. I think the NHS was funding homeopathy as well! Even worse. In the article they say the following:

“And when no effective treatment exists for a medical problem, it leads to a tendency to clutch at straws. Research has shown that acupuncture is little more than such a straw.”

While there ARE effective treatments for migraine, it can be a b*tch to get under control for many and there is that tendency to clutch. Totally understandable.

I found it very relaxing though so. Can it be good for relaxation?

Is there any scientific proof that proves it works? Should we look at both sides of the arguement

Other studies have concluded it has value beyond placebo. 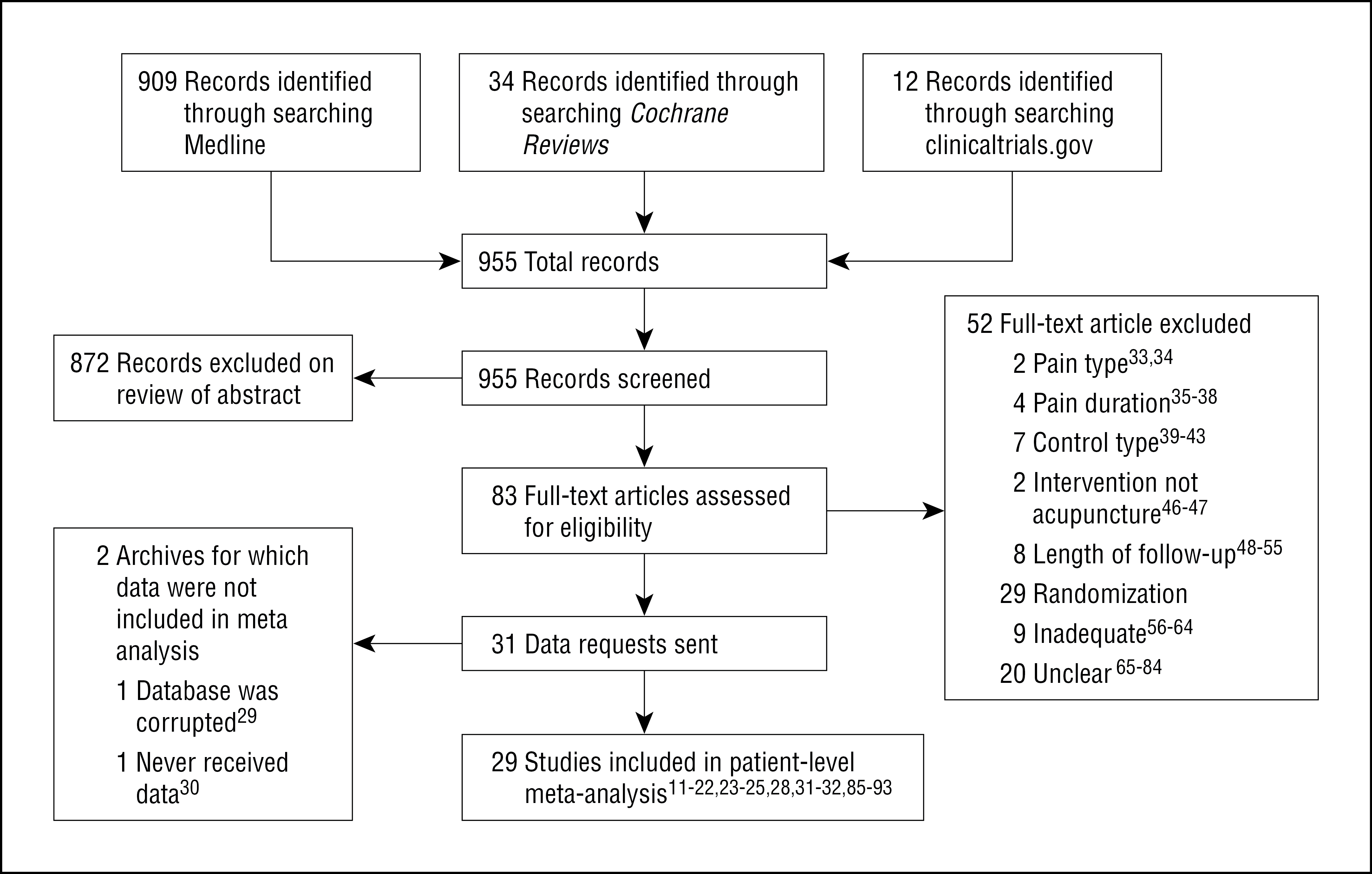 Vickers and coauthors conducted a systematic review to identify RCTs of acupuncture for chronic pain in which allocation concealment was determined unambiguously to be adequate. Individual patient data meta-analyses were conducted using data from 29...

I dont have an opionion on this but I think we should definitely look at both sides.

I have never tried it, but who knows, some day I may. Many people have wasted their money on visits to well credentialed doctors who end up offering no help at all. I think it is up to an individual to decide if they want to “waste” their money. When I was feeling at my worst with this, I was willing to try anything. I also think if people feel better, even if it is a so called placebo effect–GOOD for them!! Who cares if it is a placebo effect, if they feel better, they feel better! I just like to keep an open mind and I am open to anecdotal analysis not just scientific. It is just the way I am wired. I appreciate all perspectives and am glad all perspective are represented here on this board. That is why it such a great place for information.

Agree 100% swirlgirl. I think scientific analysis is great but it doesn’t tell the whole story. The mind/body connection is very powerful and believing in things can make all the difference. Plus, thousands of years of track record is hard to argue against. Too many people have found relief for their to be no benefit whatsoever, whether placebo or otherwise.

I dont have an opionion on this but I think we should definitely look at both sides.

Hillsta – that’s the whole point of the article. There is no other side. It doesn’t work – not clinically relevant.

My mom bought into the whole argument that the Chinese have been doing acupuncture for 1000s of years so it must be beneficial. I look at it, however, that through the years “healers” used to do a lot of crazy, bogus treatments, but tradition does not mean that something actually works. (Look at the use of blood-letting in Europe for hundreds of years, even though it didn’t cure anything… except for possibly iron-overload disorders…)

I say, if it makes you feel better, go for it. However, personally, I’m sick of spending my money on chiropractors, acupuncture treatments, dentists and doctors that have NO IDEA how to cure my vestibular problems and do not help me feel better.

I’ve spent thousands of dollars on bogus treatments, and I’m thrilled to have empiracal data to help steer me away from wallet-suckers.

Other studies have concluded it has value beyond placebo.

Andy – have a read of the article link I posted. We cannot cherry pick the odd positive result and conclude that it might work. Rather, there are now some 3,000 studies on this now and taken together, the result is nil. That’s the important take home message.

So yeah, it’s a placebo and if someone feels better for a few days and doesn’t mind parting with the cash then sure, go for it. Just know what the limitations are.

Scott, what i mean is how do we know that there are not 4000 studies that prove it works?

The new report, the largest analysis of acupuncture ever conducted, involved nearly 18,000 patients and doctors from eight universities and hospitals in the UK, the U.S. and Germany.

They found that traditional acupuncture worked better than a placebo.

In fact, in conditions such as arthritis and chronic headache, acupuncture was twice as effective as the drugs and exercise recommended by most doctors, according to the analysis published in the authoritative Archives of Internal Medicine.

The National Institute for Clinical Excellence (NICE) recommends it for back pain and arthritis, but is considering whether to add headache.

if i can find this from one google search then i am sure we can can find loads of studies that prove it works.

We should look at this from both sides

The new report, the largest analysis of acupuncture ever conducted, involved nearly 18,000 patients and doctors from eight universities and hospitals in the UK, the U.S. and Germany.

All up, problematic and not at all impressive or compelling. The media of course don’t know how to interpret studies like this and went crazy.

like is said i dont have an opinion on it apart from the fact that i found it very relaxing. I wouldnt go again though.

China has a population of 1.344 billion so do you think eastern medicine is a load of rubbish?

Have a look at this 5 min talk by Steve Novella:

Yes, absolutely, I think Eastern medicine – so-called alternative medicine – is nonsense. It was useful once upon a time when the alternative 200 years ago was blood-letting but not now.

But i know someone with MAV from a facebook group and she saw big improvements when she tried acupuncture and she gets it reguarly to stop symptoms worsening - so is she imagining it??? I was going to try acupuncture based on her findings…

Not imagined. Placebo does appear to have an impact for a variety of reasons but it is not a viable long term “treatment”. It’s a bit like having a foot rub and feeling better for a while afterwards. Or even like when you bang your elbow and rub it, you get temporary relief. Anything of clinical significance is non-existent.

Ok thank you Scott, i think i will remove myself from other MAV/migraine groups, they just confuse me and stick with the information given here