Hello all! Thank you so much for allowing me to be a part of this forum. I wish I would’ve discovered it sooner. I’m 24, been having symptoms for 17 years now. Thankfully I got a diagnosis last year for VM. Now I’m on the road to recovery, slowly. Diagnosis is half the battle, but it’s definitely taken it’s toll. I’m dizzy and forgetful most days, but I get episodic vertigo a few times a year. I absolutely love hiking, camping, kayaking, reading and music. I try my best to make a positive impact on people everyday, especially myself. I hope we can all find comfort in knowing we’re not alone!

Dizzy Las Vegas buddy, you are welcome here! I’ve had MAV my whole life. Don’t let it stop you. I’m 46, short, fat and dizzy. I still hike, kayak, backpack, bike and snowshoe every chance I get. Get well medicated. Learn how to dance the line of your thresholds. Take on those mountains like a boss!

Thank you for welcoming me @flutters, I do appreciate it. I can’t imagine having MAV for so long, but look at you, doing what you want! I am deeply in love with adventure, I’m sure you can attest to that. I’m glad you’ve reached out to me. I see you’re doing some form of keto, can you tell me about it?

Effexor likes to kick me out of ketosis (and adds weight), but I feel better so I keep doing it. I generally keep to 40-50 net carbs/day, mainly made up of above grounds vegetables, nuts, seeds, healthy fats and a moderate amount of quality proteins. I try to stay hydrated and balance my electrolytes. I hit the gym 3-5 days a week with 45-60 minutes of cardio and some weight training with my husband. Yesterday’s snowshoe was a couple of hours at elevation with a healthy climb (maybe a 1300 gain). Today I swam a 2k. We try to mix it up.

I hit the drive thru with my husband twice a week. He’s s cheeseburger/ fast food addict. I’m guilty of giving in too. That’s awesome that you’re able to do all those things. You inspire me! The Effexor didn’t do anything for me, unfortunately. I will find my helper soon.
I’m going to try the elimination diet starting tomorrow. Have you tried it? 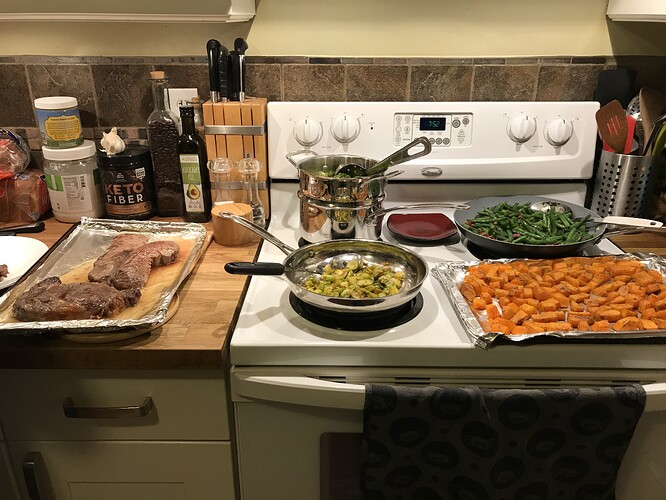 I’ve tried some of them. My version of ketosis avoids most trigger foods except cured meats and nuts. I’m good with both so long as the meat is naturally cured with celery salt and I balance the potassium in the nuts with salt. I don’t eat grains and I can’t eat eggs or dairy. I can’t tolerate sugar or sugar substitutes and don’t do well with fructose or tomato. I’m sort of keto autoimmune protocol by accident. I am caffeine free except for my rescue med.

Tonight’s dinner is a cook all the stuff that needs eating. We’re having some steak, green beans with some bacon sautéed in coconut oil, Brussels sprouts pan fried in coconut oil, steamed broccoli and roasted butternut squash with allspice. Extravagant in the variety but not atypical. I’ll go easy on the squash.

wow… nice combo of food @flutters. I stayed on my weight for a while but since a couple of months ago, I have just being putting on weight by the minute. I am more or less on a low carb diet and doing exercise (plus chazing a toddler all the time)… i think is the effexor.

It is the Effexor! After months of effort, I was down to a less fat weight over the summer. Effexor gave it all back plus 5 for good measure.

That all looks wonderful @flutters! I can imagine the time it took to figure out what worked for you. Have you tried any other elimination diets before?

ugh… need to learn to not care about the weight.

Nope. Just stopped eating my known allergens (blood test) and worked out triggers more or less by accident. Go camping and forget coffee, not dizzy for a week. Hmm. I did keep a fairly detailed diet and symptoms log for a while.

I thought on it longer. I also have PCOS with insulin resistance. So, in terms of elimination, I’ve learned a lot about high glycemic index foods. I’m careful with those. I ate a small apple on top of the trail the other day, but turned down the banana. Too much sugar. I thrive on protein and fat.

I also have a lot of scar tissue from hysterectomy surgery from endometriosis (from PCOS). Inflammation begets scar tissue begets inflammation. So, I eat anti-inflammatory. Probably going back under the knife this year anyway because my insurance thinks I’m cured after 2+ years and 70+ PT visits and won’t let me go to PT anymore to stretch the scar tissue out. I blew out my kidneys with Topirimate and NSAIDs which means I have no real way to deal with the pain of having my sacrum, pelvic bones and hips glued together and stuck in unnatural positions, not to mention the strangulation of my bowel, so I’ll probably start over with new surgery to cut out the damage from the old surgery which will create new damage. Anti-inflammatory is sort of a must for me, as is sugar avoidance.

After a while, you run out of stuff to eliminate and find some comfortable place where inflammation is low, allergies are ok, skin is ok and MAV isn’t going crazy.

It is hard. Pride is the last to go, I think.

be proud of the body you have, it can do wonderful things! I’ve always wondered if my migraines got worse because of my weight gain. I found this post interesting: Obesity and Headache/Migraine: The Importance of Weight Reduction through Lifestyle Modifications
Let me know what you think

Maybe I’m allergic to some foods too. I know for sure grapefruit. I’m going to give this an honest shot, hoping that I’ll have as much success as you.

interesting… I am ok with my body, it is just the little anger about having to take care of so many things and still being dizzy and now a little overweight.

what to do! Need to keep life in perspective every day

Weight is not a measure of worth. It’s a statistic, a piece of data like your hair color or shoe size.

We here know you and we value you by your weight in gold. (So, add a few pounds.)

I’m there with you! But, we only have today once, gotta make the most of it.

do what you can until you can do what you want. @flutters you’re so wonderfully expressive.

My job entails much writing. Only here do I get to wax poetic.

Well I’m glad you do! May I ask what you do for work?

What’s all that? I run a small planning and administrative consulting firm specializing in small and rural municipalities in Washington State. We’re the town/city planners for several jurisdictions. I’m also a hearing examiner, which is sort of a judge for land use and code enforcement cases. Tons of writing, most of it legal, lots of it boring.