It’s been a week and half since I had Botox

It’s been a week and half since I had Botox and sadly things are getting progressively worse. I tried to make a family meal yesterday but the car journey - either the journey itself and/or sun strobing - greatly exacerbated things. I couldn’t stand hearing more than 1 voice, facing animated people talking and the light. I was so dizzy I was very quickly sick and had to be taken home.

I don’t know if it’s the Botox (round 2) or being on Nortriptyline or being off of sodium valproate which has made things worse (I have come off SV with the hope I may try for a baby in the future but thinking this is just not meant to be for me as I’m now in my forties!). I stepped up to 40mg Nortriptyline yesterday after 3 weeks at 30mg. Just preying at some point things calm just so slightly. Or maybe it’s the Botox? I have heard some people are worse for the first 2-3 weeks after. Although the first round didn’t seem to affect me one way or the other. Any advice greatly appreciated.

Sorry to be a miserable old kill-joy and feel free to hate me by all means but perhaps the timing of the family outing wasn’t ideal. You could note all the MAV management tips I’ve ever had from medics on the back of one postage stamp and possibly have space left for a signature but I did get it drummed into me from all angles to get best results from meds to practise trigger avoidance. Perhaps it wasn’t best practice to up the Nori on the same day as the family gathering and so close to the Botox. Triggers are culmulative and you pushed them over the top. So neither are at fault really, just the combination. Trust it settles soon for you. Helen

No I think you’re right Helen. It’s just because I haven’t been out of the house for the past 8 weeks so thought I should push myself. I learnt my lesson! I didn’t actually increase my Nortriptyline dose until last night but maybe the Botox is causing issues.

I do find it so very strange how symptoms seem to morph over time with this condition. I said to my partner I’m feeling the worst I’ve ever felt in last 5 years (since first experiencing MAV), and he said, quite rightly, that I’ve said that a few times before! But it’s difficult to distinguish what’s worse - vertigo or feelings of dizziness, or nausea and head pressure etc. It’s all bloody horrible. Or least it is right now. Trying not to give up hope that one day I’ll improve.

Natty
Im always worse after Botox for at least 2 to 3 weeks. In fact last treatment 7th Dec i still had a increase in symptoms at new year and remember saying to myself i wish i hadnt had it done. Now ive looked at my diary and ive had no head pain, pressure or ear/ nose pulsation at all in feb and ive been ill with flu and chest infection as well.
Jo

Hey Jo, that’s super interesting to hear, thanks for letting know. And it’s made me stop crying! Do you have Botox regularly? Does it help with the other symptoms eg dizziness?

Im due my 4th treatment and added Venlafaxine in middle of September…they are working hand in hand to help with pain, pressure, dizziness and outdoor visual disturbance and disorientation. I cant imagine how i would be now without this treatment my whole face used to pulsate to bursting point. I still have dizzy mornings and positional vertigo but im getting there. I couldnt walk lost 6 months work in 2015 and a few dozen odd days since so it tells u how ill i was
Jo

I see I’m going to have to take you in hand!

It’s just because I haven’t been out of the house for the past 8 weeks so thought I should push myself. I learnt my lesson!

You know they say ‘low and slow’ tirating up on meds for MAV. Same goes for stimulation and exercise. I read somewhere migraine brains like every day to be just like every other day, ie routine, routine, routine. Any sudden change will do it. Increase things very very gradually. I don’t subscribe to all this ‘pushing through’ idea at all, not with MAV at least. I’ve always found its possible to use up all your daily allocation of balance before you use up your daily allocation of day otherwise. You need to pace yourself and everything you do too.

Wouldn’t waste valuable energy trying myself. As you say it’s all pretty grim. Oh, and please don’t cry. Well not too often anyway. When I was really really bad (you can read my diary to check how bad) and felt like crying I’d repeat my matra over and over. ‘70% better after nine months of treatment’. I’d read that Dr S’s clinic did a survey to that effect.

Trying not to give up hope that one day I’ll improve.

What dose are you supposed to reach of Nori? Work out realistically how long it will take to hit it, then add on from there and mark it up somewhere. A target. You should start to feel improvement long before that but it’s an objective to work towards. I was probably 70% better after nine months of Propranolol but that’s a slower worker than Nori. And apart from a relapse in January I’ve moved on streaks since. So will you. Helen

Helen you’re a star! X
So helpful and supportive.

Dr S hasn’t provided a target for Nortriptyline, I was just told to increase by 10mg every 2-3 weeks, I think for now up to a max of 100mg. Once I start seeing an improvement, as little as 20-30%, I am to start spacing out the titrations to every 4 weeks.

Your on the right track…you WILL get better
Jo

So sorry to hear you’re feeling worse atm.
Dr S said to me to expect some setbacks. It doesn’t mean you don’t progress overall.
Interesting he said to titrate up every 2-3 weeks and then 4 weeks to you. He said 3-4 to me, with the same medication. I wonder what he bases the recommendation on.
Wishing you strength and recovery

I’ve been having Botox every 3 months the past almost 3 years. Sometimes I find I can feel worse for a couple weeks but then again I’m never sure if it’s just me as I’m not well and have other conditions. Overall though, as times gone on, I think it has helped the headaches, dizziness and nausea. I’m trying 5 months gap at present ‘eek’ as I have to travel almost 4 hours for treatment and can’t do it at the moment. I hope it eases for you

Love your name fedup!!!
Im waiting to have Botox number 4 it should be due March 7th but as yet no appointment. I can slowly feel my face, neck and ear pain creeping back in. Do you notice a increase in symptoms if when you get past the 3 month mark?
Jo

Thanks for sharing your experiences with us natty, are you feeling any better now? I am being considered for botox at my appointment in April. I’ve been keen to try it for months now as nothing else i’ve tried has helped at all. It does concern me that most of the migraine treatments have the potential to make us worse. I tried 4 meds and each of them increased my symptoms rather than help them. I kept being told that the increase would be temporary and if i pushed through it would get better, but it never did. I spent a whole 3 months on each med getting worse and worse every day until i stopped the meds. I don’t understand why some treatment triggers migraine when it’s supposed to prevent it, the meds don’t share the same ingredients. So i’m worried that botox will make me worse too, especially since its stuck in your system for 3 months, you can’t stop taking it the way you can stop meds. I’ve never seen a single other person have every single med they tried make them worse, so i feel like i am different to everyone else, not having the same reaction as everyone else, and that worries me (will anything ever work for me?). I hope the botox will help you, let us know how you continue to get on!

@Onandon03 it’s a relief to see you say you don’t support the pushing through method. I heard it from so many people i felt like a weak failure because pushing on only increases my symptoms and makes me worse, for days or weeks sometimes, not just a few hours. Yet it was insisted repeatedly to me from others with MAV that i needed to push through even when it made me worse. I t made me feel pathetic, like i would never get better because i couldn’t push through. We don’t keep eating food triggers in order to acclimatise, so why should it be any different with exercise or exposure to other triggers? Migraine doesn’t work like that. Some people do get better from exercise or activity, and get worse from inactivity, but it isn’t the same for everyone. I would challenge anyone who insists to others that they need to push through symptoms. All it did for me was worsen my condition and affect my mental wellbeing.

4 posts were split to a new topic: i feel like i am different to everyone else

Guys, given it’s someone’s Diary Topic, please create a new Topic if you wish to discuss experiences with a third party.

Use Reply as Linked Topic option, it’s a bit hidden: 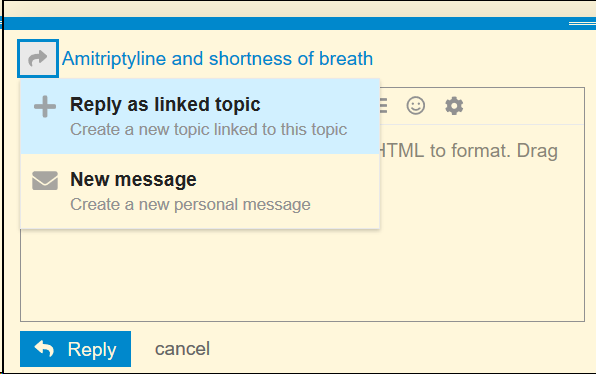 Thanks for your message. I will reply ASAP having a bad patch and the screen isn’t helping! Speak soon…

I find that the nortriptyline only works for me at a dosage of at least 50mg. I have been up and down on it for a couple of years and once I reach 50mg (which I am on now) then my head pressure really subsides. This is a major improvement for me as the head pressure and heavy head feelings are horrible. I do still have some other MAV symptoms, but at least I am able to function now. I tried botox, but it wasn’t for me unfortunately. Each one of us with migraine variants have different symptoms and likely different causes, so what works for one does not always work for another. It’s definitely worth a try though.

Sorry your symptoms are creeping in

I think in the early days of Botox I noticed it a lot more when it was wearing off. Two weeks prior, headaches would increase. As times gone on I still notice (like now) some more headaches daily, that come on in the past fortnight, as it’s been about 13 wks since last dose - but overall I think the longer I’ve done it, the more effective it’s been overall. Seems to take a while. I’ll be interested to see if it goes real haywire between this session as this is the longest I’ve gone

My next appt is mid April. I do hope yours helps you. I still have the MAV & other conditions but I think it’s helped