Just got back from my last VRT for the time being. I mentioned my annoying symptom of start/stop type vision when watching movement - particularly on TVs. She told me that isn’t something she thinks VRT can help with and go and see a neuro ophthalmologist. Then gave me a contact.

Got me thinking, and slightly worried. So as I do… googled this to see what I can come up with so to discuss with neuro when next we meet. Akinetopsia! This fits me exactly. It’s not as severe as others but describes what I see really well.

When watching panning shots or movement, it stops and starts as if I’m seeing every frame. It doesn’t happen in real 3D life - or maybe not as noticeable.

Now, what could cause that? Brain lesions! And I have many from ‘migraine’ apparently. I wonder whether I have a brain lesion in the V5 portion of the brain.

Just look at how quickly I jump to conclusions and self diagnose, BUT this is something worth investigating. And if it is lesions, then I have a big case to continue on long term preventative medication I think!

I don’t think white spots on brain have been shown to affect anything? Perhaps they are just benign?

It’s so easy to Google and get anxious about something.

Sounds more like you need to consider a vestibular suppressant to dampen your VOR potentially? (for the time being).

Are you seeing an oto-neurologist?

I got all kinds of visual vertigo at one point but was almost completely eliminated by Amitriptyline.

At its worse I would experience my entire view swing from side to side.

I would have problems like odd artifacts when looking at pictures of trees with lots of complex vertical shapes.

I couldn’t look at screens or watch television.

I would actually feel dull muscular pain in my eye.

White spots are so mysterious and under researched. I wonder what the next couple of decades will reveal?

Yes I’m seeing a neurologist/otoneurologist. I emailed him a couple of weeks ago with this symptom and he replied with visual dizziness that can take a while to go. But still… I don’t hear about /read about too many other people with this variety of symptom.

Yep I’ve had all that too @turnitaround, and can remember the painful eyes - even to move them. Not fun. I’m going to enquire about Ami but I know you can’t take that with pizo and pizo has helped a lot. My eyes have been a persistent problem. The vestibular systems and the eyes are best buddies aren’t they.

Yep I’ll give google a rest but it was an interesting find today. It’s just incredibly annoying!

It definitely is that !!

Got my brain whirling that one Bee. Never heard of it but then thought, ah, it’s big sister/little brother to Palinopsia and … my take for all it’s worth … try this one …

The akinetopsia often occurs with visual trailing (palinopsia ), with afterimages being left at each frame of the motion. It is caused by prescription drugs, hallucinogen persisting perception disorder (HPPD), and persistent aura without infarction.

Words jump out at me there, “Prescription drugs” … could it be the Pizotifen causing it I wonder? Can you plot a timeline?

Another word, somewhere, I liked was ‘perception’. Could well be your akinetopsia is just part of your brain’s very individual reaction to VM. We see what the brain perceives and it’s currently under too much pressure to function totally correctly. 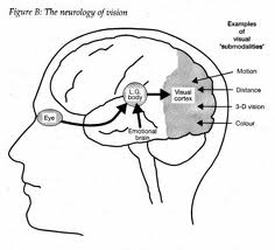 Akinetopsia is an acquired deficit from lesions in the posterior side of the visual cortex. The neurons of the middle temporal (MT) cortex respond to moving stimuli. This suggests that the MT cortex...

Akinetopsia (Greek: a for "without", kine for "to move" and opsia for "seeing"), also known as cerebral akinetopsia or motion blindness, is a neuropsychological disorder in which a patient cannot perceive motion in their visual field, despite being able to see stationary objects without issue. There are varying degrees of akinetopsia: from seeing motion as frames of a cinema reel to an inability to discriminate any motion. There is currently no effective treatment or cure for akinetopsia. Akinet...

after very quick scan read somewhere in the above antidepressants are listed as possible culprits … and hey hoo Pizotifen is 50% tricyclics AD. So there’s a question to be asked.

How I cured my Palinopsia

Btw to say I am impressed with the observational skills and abilities of your VRT body would be understatement of the year. It seems in some parts of the world they really do seem to know their stuff.

Thanks for the research Helen. We all have learned something new today.

Well I guess I just play the waiting game and see what time does. Interesting about anti depressants. I’m not sure the equivalent dosage for pizotifen to be regarded as a high dose. I’m on 1.5mg.

Yes my VRT is pretty good. I’ve got her mobile number to text at anytime. My next BPPV attack no doubt.

I need to get off Google - it really isn’t good for me, but I just can’t help but feel I need to know more about my symptoms. Haha - just like every person with health anxiety says.

Will keep Akinetopsia as a point of discussion for my next appointment.

I’m not sure the equivalent dosage for pizotifen to be regarded as a high dose. I’m on 1.5mg.

No I doubt it is but as a MAVer and bearing in mind our hypersensitivity I would totally discount that from relevancy.

If Scott wants to move this to success stories feel free

I have been a dizzy for four years but now I have found pitzotifen combined with amitriptyline I feel soooo much better! I would say I’m 95% now sometimes less on bad days hormones/illness etc. I hope this gives hope to anyone suffering that things can and do get better. Thanks for everything but I’m going to bow out of the boards now and get on with life. Lots of love Donna

I will look into it. I don’t want Serotonin syndrome is all.

So much to consider!! Thanks

Sometimes too much knowledge is a dangerous thing. Ignorance can on occasions be bliss. From what I have read occurrences of Serotonin syndrome are much more a possibility rather than a probability it seems. I will be interested to hear what your specialist has to say on Akinetopsia. Can you pinpoint when it first arrived? Could it be drug linked by timing?

I cannot imagine it’s Akinetopsia you have. If you haven’t had a trauma, stroke etc why would you and why now? Two conditions one on top of the other? You are young and fit, do why such misfortune all at once. Much more likely it’s just part of your MAV visual stuff and just mimics Akinetopsia.

Amitriptyline for MAV is usually taken up to 50mg (and normally 30mg). It is more responsible to take it at the minimum helpful dose as you don’t want to alter your neuro chemistry more than you need. Some people take higher levels for MAV but that’s a personal decision.

It used to be taken for depression at 150mg to 250mg so I imagine there is quite a lot of headroom.

That doesn’t mean you will be immune from additional side effects though like shaky leg.

You could also consider switching instead of adding if you decide you need more vestibular suppression than your current drug provides.

Hi Belindy
I had visual disturbance which felt like my eyes were tripping over themselves. I can’t explain it very well and, in an effort to understand me, my neurologist described something very much like you describe.
I’ve been on Ami 20mg for about 3 weeks and my visual disturbances have stopped.
Hope you find a solution.

I have this when I’m tired or when looking at screens too long. It’s a sign I’m sending myself into aura and need to be mindful. It’s happened for me for years with and without MAV drugs. I consider it part of visual vertigo or just aura. Much of my stuff is visual. Learning to see the early signs of something bigger has helped me a lot in slowing down and taking better care when I need to. I was also sent to a neuro-ophthalmologist. He was worse than useless.